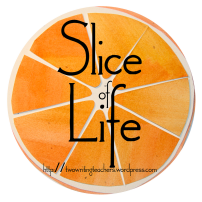 Yesterday I attended a caucus in my small town in Maine.  I wasn’t sure what to expect. Lately the political process has descended into this venomous proposition in which contempt and open hostility for “others” is condoned and even celebrated. Agreeing to disagree seems to be a flaw that is no longer acceptable. So when I walked in and saw various friends and acquaintances with Bernie buttons and Hillary stickers I wondered how our community politics would unfold. 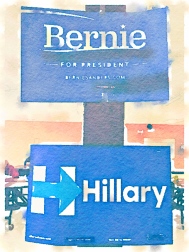 We listened to candidates speak. Each getting enthusiastic applause. We attended to party business in selecting  our county officers and delegates. And then came the moment when we needed to stand up and walk to our corners of the room to physically announce our choice for presidential candidate.  As I saw friends stand, I tried to guess which direction they would move.  I knew demographically the younger ones would “Feel the Bern” and the older ones would “Stand With Hillary”.

I made my move and gazed about the room.  It was quiet and folks seemed to be making the same mental assessments as I was. Each “side” had a representative who came to speak for their candidate. To my great joy, there was no mudslinging.  No name calling. No belittling.  There was passion for their candidate and a warm embrace for their ‘opposition’. There was applause from all sides of the room after each speech. There was agreement that we were blessed with two wonderful candidates and did not have to “choose between the lesser of evils”.

I thought about David Brook’s NYTs editorial The Governing Cancer of Our Time in which he said, “Politics is an activity in which you recognize the simultaneous existence of different groups, interests and opinions. You try to find some way to balance or reconcile or compromise those interests, or at least a majority of them. You follow a set of rules, enshrined in a constitution or in custom, to help you reach these compromises in a way everybody considers legitimate.”

That is exactly what I was seeing before my eyes. This was politics as it should be. Those on the other side of the room were not my rivals.  They were not wrong.  I was not right. The heads were counted and a ‘winner’ emerged.  There was subtle applause and then we all mingled again.  Hugs. Handshakes. “See you tomorrow”s.

As David Brooks went on to say, “Politics is in retreat and authoritarianism is on the rise worldwide. The answer to Trump is politics. It’s acknowledging other people exist. It’s taking pleasure in that difference and hammering out workable arrangements.”  I no longer think of politics as a dirty word. It’s messy and sometimes disappointing, but it doesn’t have to be vitriolic and hateful. If more people, other than the angry and frustrated,  were a part of our politics we would more easily hammer out workable arrangements and bring civility back to the process.  I didn’t really want to caucus today. I just wanted to vote. But if I had stepped into that booth by myself, voted, and left I would not have witnessed what is good in politics. What it can be. What we need it to be.

Oh, in case you were wondering…

12 thoughts on “Politics is Not a Dirty Word”

Integrating New Literacies into the Teaching of Writing

A community of readers

Inquiry Live in The Classroom

A place for literacy, curiosity, and technology to dwell