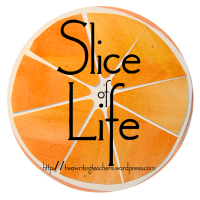 I once had a conversation with Lynda Mullaly Hunt about how and where she gets her ideas for her stories. One thing she said that stuck with me,“Ideas are everywhere.  Sometimes I’m standing in line at the grocery store and I have to write them down.  I hear somebody say something and that triggers an idea… I have receipts and pieces of paper  with ideas and I can use those to help me.”

So yesterday as I am sitting in my doctor’s office, which happens to be located at our local hospital. I was struck by a few snippets of conversations I overheard and it dawned on me that every person here has a story. Most of the time we just live our own story and those around us are the supporting characters or ‘extras’.  But since I’ve been doing the #SOL16, I’ve been tuning in more to the world around me.  So I started jotting down the bits of conversation I was overhearing on the back of my co-pay receipt.  Most were very brief soundbites, as the people were walking down the hall past my waiting area.

What stories could I envision from just those short tastes of conversation? 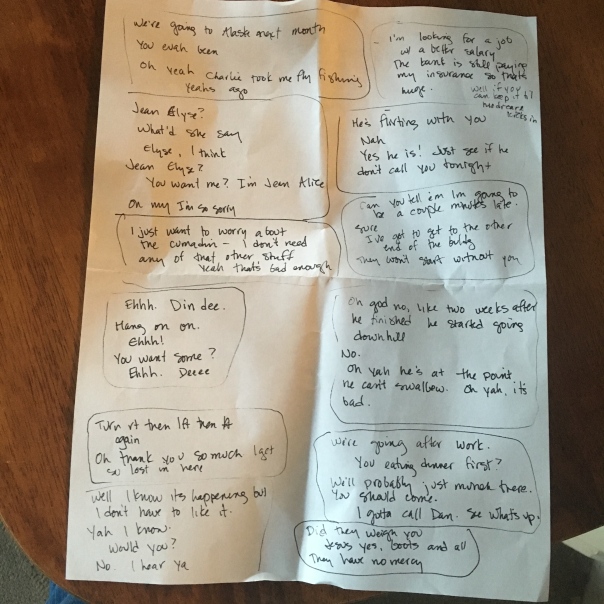 Some were heartbreaking.  Some were amusing. Some were rather mundane.  Kind of like life!  I’m thinking I’d like to keep a collection of “Eavesdropping Inspirations” from a variety of settings.  What would it sound like in the lunchroom?  The grocery store? The post office? Walmart?!!

I think Shakespeare had something there…

“All the world’s a stage, and all the men and women merely players:

they have their exits and their entrances; and one man in his time plays

What scenes can we script from the players we observe? What stories are waiting to be discovered? What part might we be playing in someone else’s drama?

10 thoughts on “All the World’s a Stage”

Enter my caffeine infused world of laughter and sarcasm.

"How vain it is to sit down to write when you have not stood up to live! Methinks that the moment my legs begin to move my thoughts begin to flow..." -- Henry David Thoreau, August 19, 1851

A community of readers