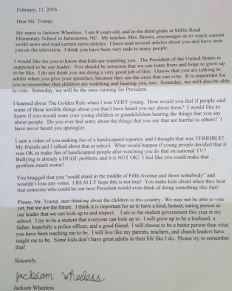 reinforced for me the power of the pen- (or the crayon!) It inspired me to work even harder to help our youngest writers find their voice.

It was a piece of writing from a third grader in North Carolina. As part of a class project he penned a letter to Donald Trump saying quite eloquently what so many of us would like to.  He laid out his position with regards to the behavior he finds offensive and frightening.  He argued for an implementation of the Golden Rule.  He appealed to Mr. Trump to “start thinking about the children in this country” and he shared the thoughts, hopes,  and fears of many children. He has a voice and found a way for it to be heard.  He is a writer!

(And I noticed the tone of last night’s debate considerable more civil…coincidence?)

This reminds me of another famous young writer who’s words had an impact in  the world. In 1982 Samantha Smith, a 10 year old girl from my state of Maine,  wrote a letter to Yuri Andropov, a newly elected leader in the Soviet Union. In it she said:

My name is Samantha Smith. I am ten years old. Congratulations on your new job. I have been worrying about Russia and the United States getting into a nuclear war. Are you going to vote to have a war or not? If you aren’t please tell me how you are going to help to not have a war. This question you do not have to answer, but I would like to know why you want to conquer the world or at least our country. God made the world for us to live together in peace and not to fight.

Andropov not only responded to her letter, but invited her to Russia.  She became one of America’s youngest goodwill ambassadors and influenced the conversation moving forward in Russian relations.

Sure these letters have garnered national attention, but we cannot underestimate the capacity for our students’ writing to influence others.  When we help them find their voice and share their ideas through their writing we are empowering them in ways we may not yet fathom or ever know.

Out of the mouths of babes (…and onto the paper)!

5 thoughts on “From the Pens of Babes”

Enter my caffeine infused world of laughter and sarcasm.

"How vain it is to sit down to write when you have not stood up to live! Methinks that the moment my legs begin to move my thoughts begin to flow..." -- Henry David Thoreau, August 19, 1851

Integrating New Literacies into the Teaching of Writing